The night started out loud as iKON went on stage with a bang and started off the show with ‘Bling Bling.’ They continued on with ‘Sinosijak’ and ‘Rhythm Ta’ and after the audience was hyped up with KONBATS (iKON’s lightsticks) in the air, they introduced themselves, not forgetting to mention that safety is always first “especially in the standing area,” they said.

Once the atmosphere pumped up, they slowed down with ‘Cocktail’ in which they had an umbrella on stage. The overall vibe of this segment was pretty chill and it seemed like iKON was trying to calm down the mood of the stage.

It was then, that Bobby challenged B.I., to a game where they divided the crowd into two and the team that sings ‘Love Scenario’ the loudest wins although, they ended up just playing rock paper scissors. Bobby lost and he had to do push ups. They then left the stage to prepare for the next couple of stages. While waiting for the members to come out, there was a video playing in the background, of them singing ‘Perfect’ which lead to 5 of them (Jinhwan, Yunhyeong, Donghyuk, Junhoe, Chanwoo) to come back on stage to sing live.

The red lights started flashing bright and that was the signal for B.I. to start his solo stage and Bobby to follow up right afterwards. After both their stages, they combined forces and started to sing ‘Anthem’ with the members coming back on stage to join them.

Jinhwan managed to throw out a pick-up line during ‘My Type’ (“I thought love starts with L, but why does mine start with U”) which was greeted enthusiastically with the crowd. B.I. on the other hand, went through an outfit change in which he changed into a onesie for ‘Best Friend.’ 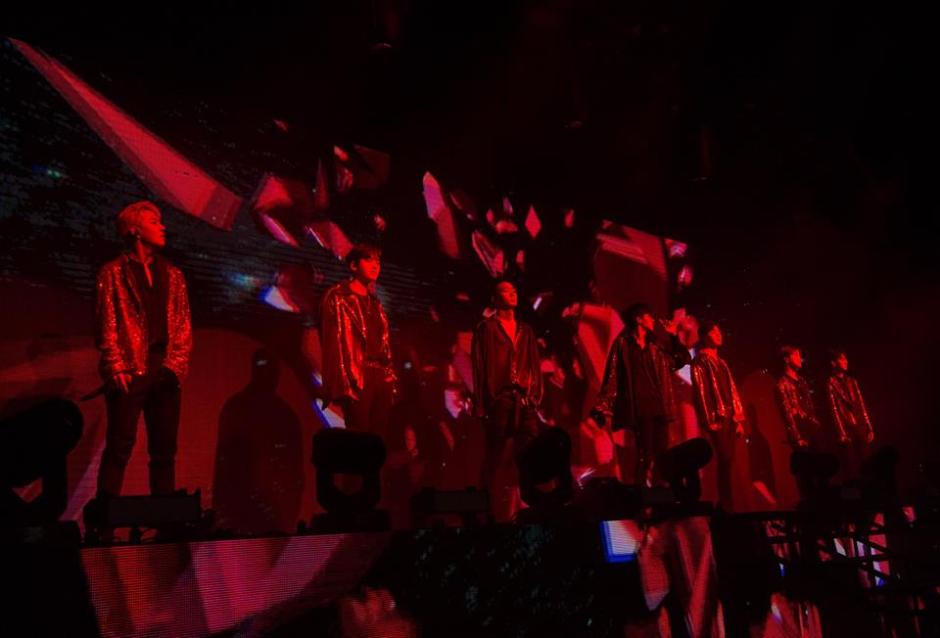 As the night was coming to an end, iKON started singing their ultimate hit-song that everyone knows, ‘Love Scenario.’ The crowd sang along to the song and the fanchants for ‘Killing Me’ brought the house down! Who would’ve thought almost every, single, person in the venue would know the fanchant to ‘Killing Me’? Little did we know, that was one of the last songs before iKON bids goodbye with B.I.’s statement, “I’m not good at English so I just want to say I love you!”

iKONICS then started yelling for encore while stomping their feet and once iKON was back on stage, it was time for the fan project (다음에 또 봐요 = let’s meet again).

Once iKON was back on stage, the crowd went crazy and the atmosphere went straight through the roof. A couple of lucky iKONICS managed to snag a towel or a tour shirt that the members threw to the crowd while jamming to the songs together. After 5 songs it was finally time to say goodbye to iKON. The lights of the hall went on, and it was time for us to go home. The concert experience itself was amazing and you definitely went home feeling satisfied.

We especially would like to thank Award Entertainment Global for giving us the unforgettable opportunity, see you again!