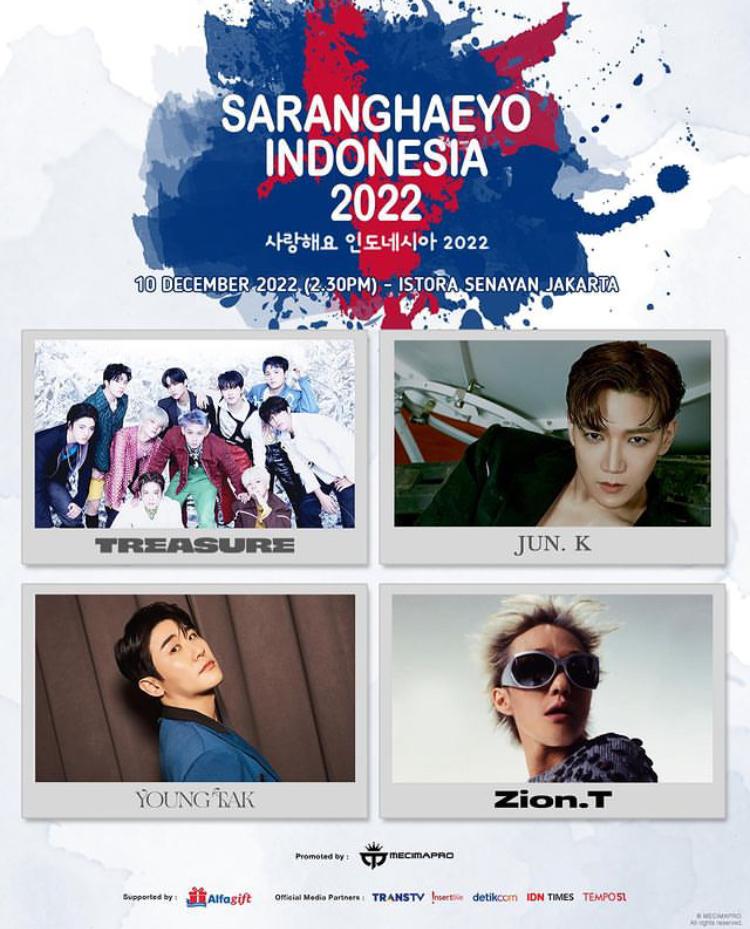 One of the Korean music festivals, Saranghaeyo Indonesia, was held for the second time on December 10th 2022 at Istora Senayan and it was filled with fans of various musical genres. It’s not surprising, because the line up for Saranghaeyo Indonesia 2022 this time is so diverse, starting from K-Pop 2nd generation legend 2PM’s Jun.K, Korean Trot Singer Youngtak, K-Hiphop Artist and RnB Zion.T, not to forget rookie monster from YG Entertainment, TREASURE, were coming to Jakarta. Let’s see the excitement below.

The first performance was opened with the presence of one of the K-pop legends, Jun.K is in the house, came while dancing accompanied by dancers performing his 2011 single “Alive.” “Halo Indonesia, apa kabar. Aku Jun.K (Hello Indonesia, how are you? I’m Jun. K!) After 7 years, today I finally came here. So are you guys ready to have some fun tonight?” he said. He also surprised Hottest (2PM fans) with his performance of 2PM’s song “My House” from the album “No.5” which was released in 2015 back on stage and continued with “THINK ABOUT YOU” from his solo album “Mr. NO♡” in 2016. 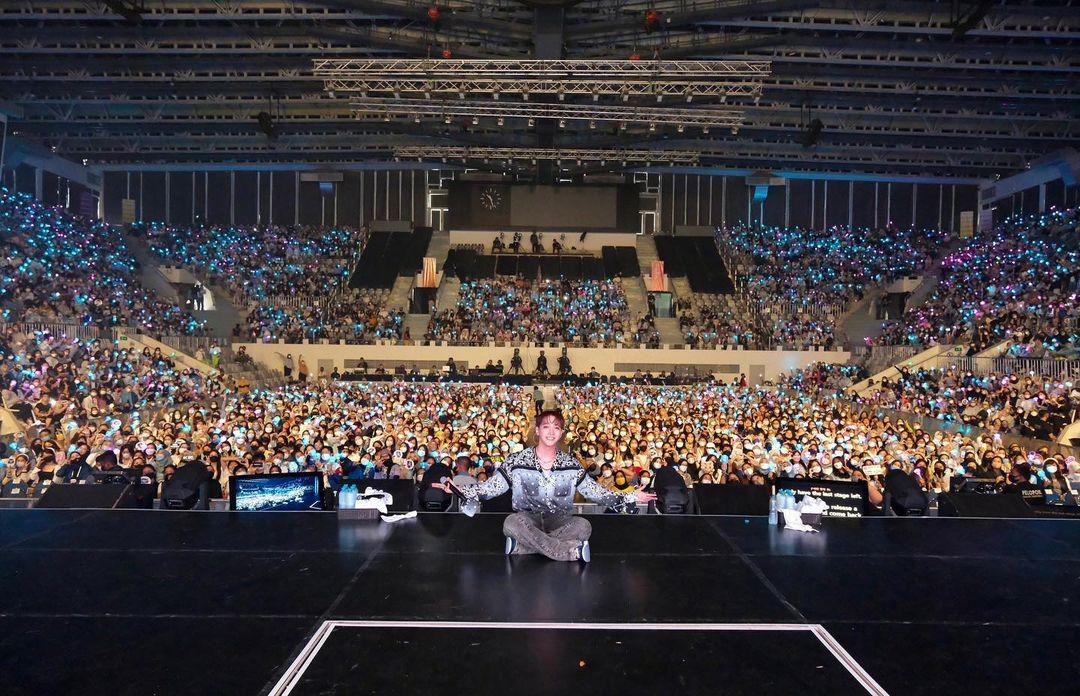 During the ment session with the MC he said he had tasted Indonesian food “I ate Nasi Goreng Ayam last night,” he replied. He also shared a secret about how he keeps his energy on stage. “I like jogging and activities that make me sweat. I also have a running machine at home,” he answered with a laugh. He also said he would like to visit Bali someday, “I want to go to Bali because I have never been there. Take me there please!,” he replied.

He continued performing with “Better Man” and “Young Forever.” It didn’t stop there, Jun.K again made the whole Istora scream by bringing a medley of 2PM’s hit songs, from “Heartbeat” to “l’ll Be Back.” It really makes kpop fans nostalgic in the 2 Gen of Kpop era. Not only songs from his Korean album, Jun.K also performed one of his Japanese solo songs “Everest” on the Saranghaeyo Indonesia 2022 stage. His performance was closed with a song by a million kpop fans around the world, it’s impossible not to know “Hand’s Up” from 2PM. The whole audience was excited again and raised their hands to dissolve in the energy given by Jun.K. We’re just going crazy tonight. “Indonesia mantap! (Indonesia is great!) Thanks for having me today!,” he said before stepping down to end his performance.

Turning to the second performer, one of the famous trot singers in Korea, Youngtak. This is his first visit to Indonesia. He opened his performance with songs from his 1st album released this year, “The Wall” and “MMM.” He was so energetic and powerful in his white suit. “Halo, apa kabar? Saya Youngtak (Hello, how are you? I’m Youngtak!) I can’t believe this, I’m very happy. Daebak!” he said. In the ment session, Youngtak asked if the audience here knows the song “찐이야”? The audience answered yes and he was surprised then sat on the stage. He looked so moved and suddenly said “Eomma I made it!” on stage that made the audience burst out laughing. 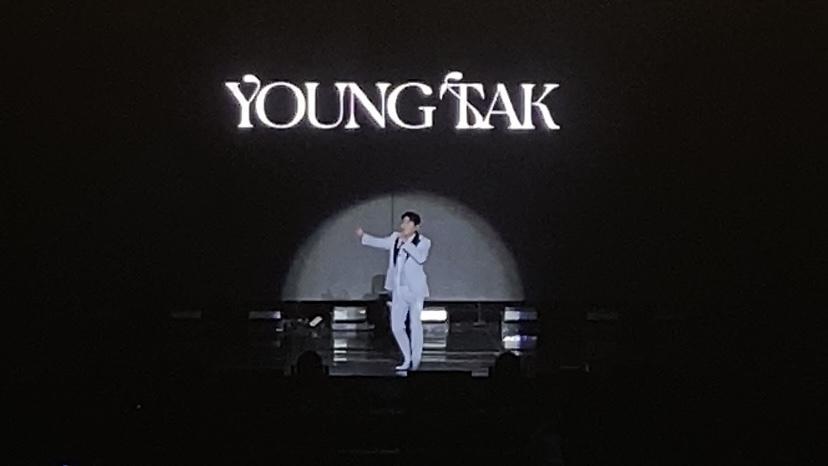 Then he continued his performance with his popular song “찐이야”. The audience was singing along loudly. It didn’t stop there, he again surprised all the audience by singing the Indonesian singer Pamungkas’ song “To The Bone.” During the talk session with the MCs, Youngtak said that Indonesia was the country he most wanted to visit. He was very happy because Indonesian people are very friendly and today they were extraordinary and really moved him. He also said that he had attended TRANS TV’s Indonesian TV show “Brownies” and enjoyed several Indonesian dishes, such as Bakso, Satay Ayam and Mie Ayam.

Third appearance, there is Zion.T! He appears using a live band with his trademark black glasses on stage. So iconic! As an opening he sang “Seethru” and “Cinema,” which is one of the songs on his second mini album “OO” which was released in 2017. “Halo semuanya, saya Zion.T! (Hello everyone, I’m Zion.T!),” he greeted in Indonesian. He continued performing with “Complex,” “Na B ya,” “The Song,” and “Eat.” 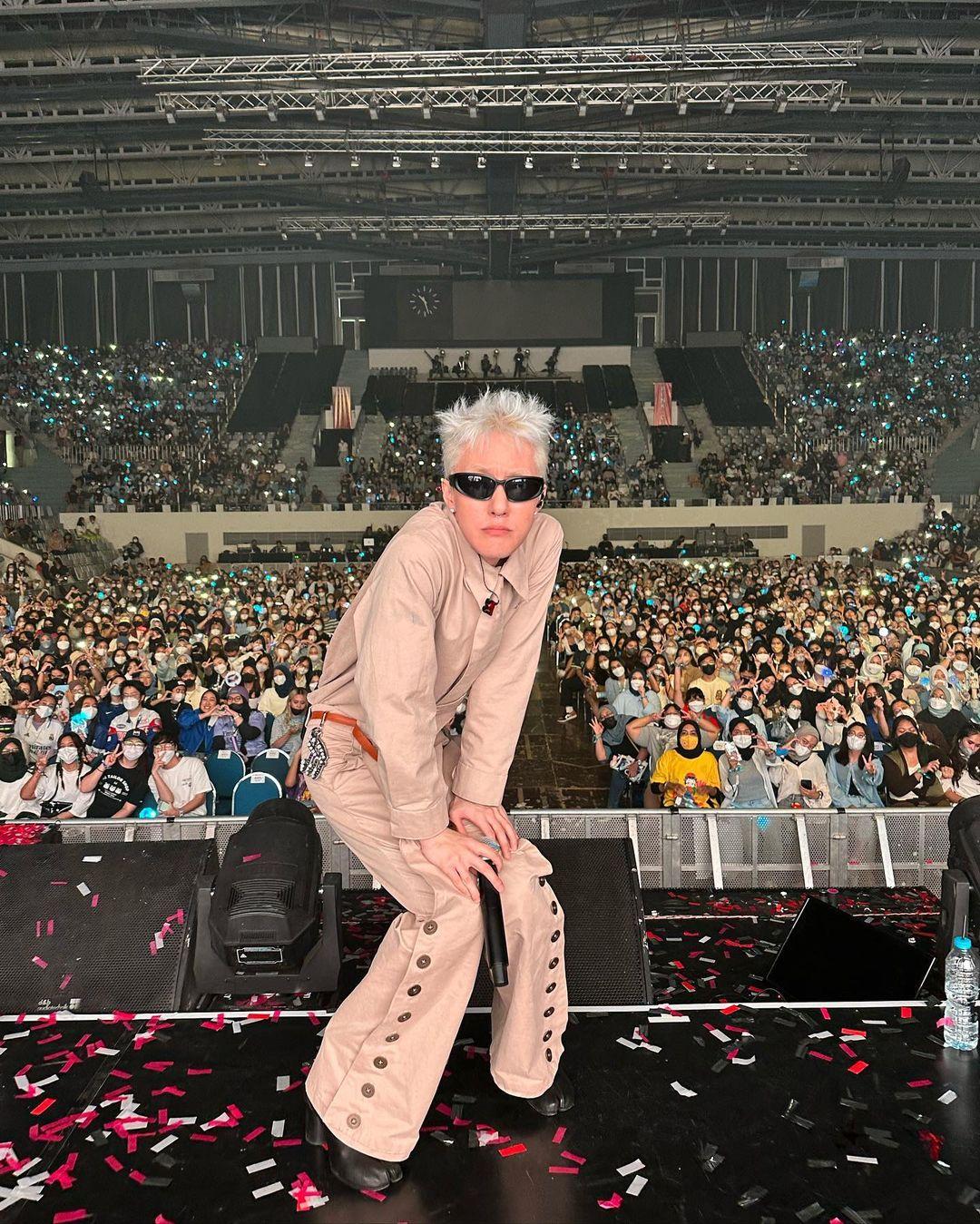 This is the second time he has come to Indonesia after his arrival in 2019. Even though he had visited twice, the MCs asked him about his favorite food while in Indonesia and how he spent his time. “My favorite foods are Ikan Bakar and Satay. When relaxing and working, for me it makes no difference. I like both,” he replied. He also admitted that Hip-hop is his favorite music genre and he is working on a new album for next year. “From the past I liked hip-hop, now I still like hip-hop. I’m currently working on a new album for 2023. I’m asking for your support,” he said. He continued performing with “SNOW,” “Just (From Young)” and his 2014 hit single “Yanghwa BRDG.” The atmosphere at Istora became full of emotion with the audience singing along and turning on their flashlights. Such a beautiful moment.

Finally, the last one that made the whole Istora scream loudly. TREASURE is coming to town! The sound of TEUME (fan treasure’s name) was loud when the youngest boy group from YG Entertainment appeared on stage performing “HELLO” which is their latest song in their 2nd mini album “The Second Step: Chapter Two.” Followed by their hit song “DARARI” which shocked the whole world. TEUME looks very happy to see their presence in front of their eyes. 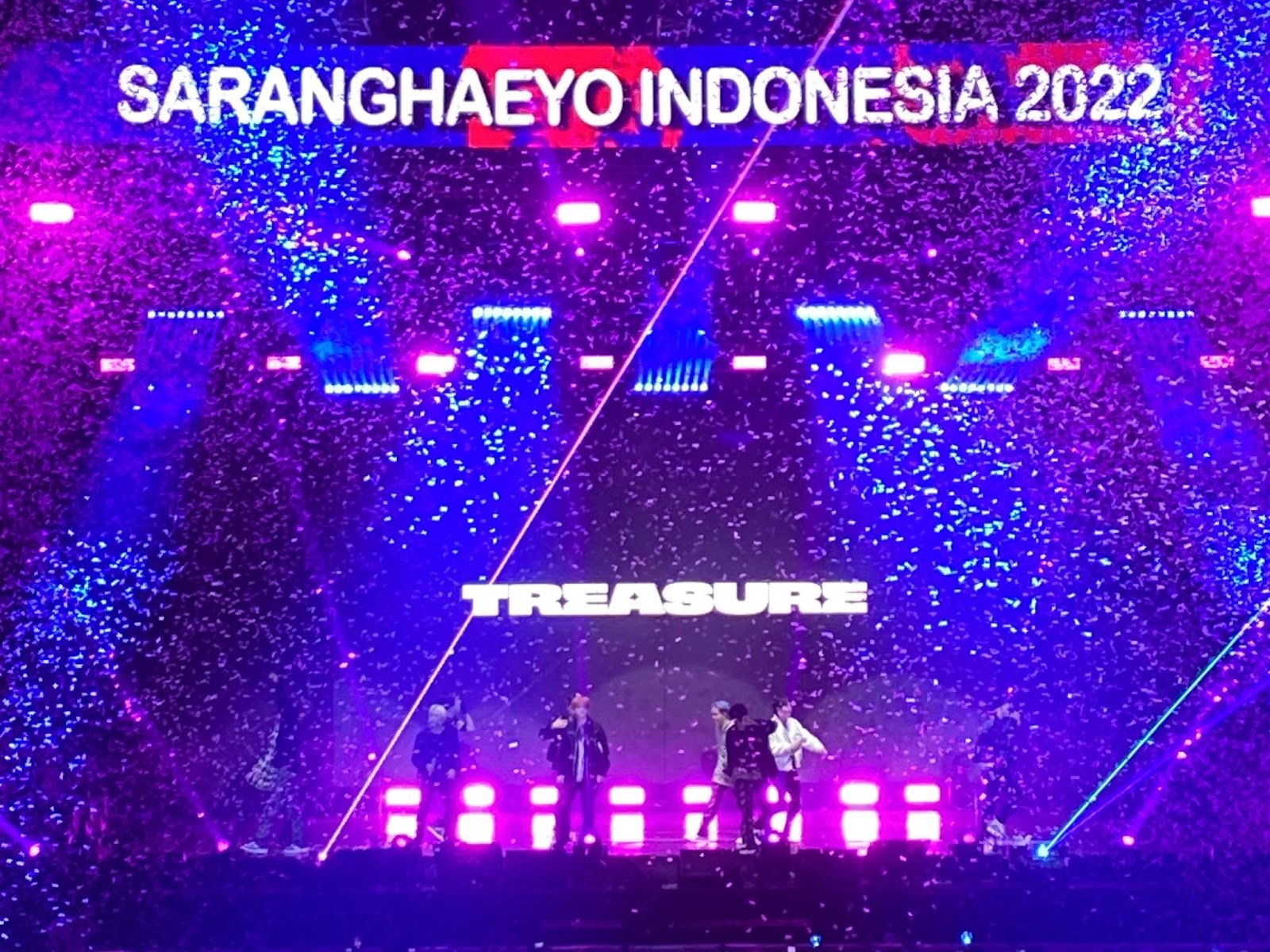 “Apa kabar? (How are you?),” said leader Hyunsuk after the performance of their second song. The MCs also asked about their impressions after coming to Indonesia for the second time. “In the past we came before debut and now we are coming again after debut, it feels very different. I am very happy to be able to come back to Indonesia. Terima kasih (Thank you),” replied Hyunsuk. Not only that, the members also took turns giving cute poses on stage. TEUME who was present was hysterical when the cute faces of the TREASURE members appeared on the screen.

The performance continued with “JIKJIN” and their 2021 debut song “BOY.” The entire audience was swept away again by the charm and energy of TREASURE. “I am so happy!” Hyunsuk said. “We are happy to meet TEUME Indonesia. We also have happy news so stay tuned. Hopefully next year we can meet again,” Junkyu said before moving on to his next performance. TREASURE returned to the stage by performing “MY TREASURE,” “MMM” and closed with “I LOVE YOU.” It’s such an amazing and wonderful show. We had a very delightful and pleasant time with them. See you on the next show! Until we meet again.