The surroundings of Balai Sarbini, Jakarta yesterday didn’t seem that crowded, but surely there were a lot of people here and there around. That thought blurred out slowly as we got closer to the entrance of THE BOYZ‘s very first Asia Fan-Con Tour in Jakarta “THE CASTLE” venue. Inside, big crowd of fans constantly showing their love for the 12 boys by screaming their names throughout the waiting as we were just minutes away from the beginning of the show.

A grand entrance by THE BOYZ was made by their “The Boy” performance, which then followed by “Right Here” stage. The fan-con has officially started and after the opening stages, New, Kevin, Sangyeon, Ju Haknyeon, Sunwoo, Younghoon, Hyunjae, Juyeon, Hwall, Jacob, Q, and Eric, went back to greet Indonesian The Bs (note: official name of THE BOYZ’s fans) and showing off their Bahasa Indonesia skill.

Sunwoo also expressed his amazement because of the crowd and loud chanting, while Haknyeon said he feels very nervous as he finally meets Indonesian fans.

The 12 of them then divided into 3 groups The Team, B Team, and Jjang Team, to play 2 games: song & dance matching and whisper challenge. The boys then have to dance to Chungha’s “Gotta Go”, BLACKPINK’s “As If It’s Your Last”, EXO’s “Growl, BTS’ “Spring Day”, and GOT7’s “Hard Carry” while doing the song and dance matching. The audiences laughed at the boys’ protest on how their fans sing the songs really well when they are supposed to be The Bs.

The game session continued with whisper challenge where the 3 groups have to deliver Indonesian words while blasting their ears with high-volume music. Jjang Team was the only one succeed with the word “Nasi Goreng”, while the other failed to make the last member said “Soto Ayam” and “Taman Safari”. THE BOYZ then performed their special stage for Indonesian The Bs by bringing their own version of Indonesia’s song, “Cukup Tahu” by Rizky Febian.

The concert then went on with all of the remaining performances, including covers of EXO’s “Call Me Baby”, TWICE’s “Cheer Up”, and their recent hit “Bloom Bloom” that successfully giving them their first music show trophy. Encore started and 12 of them expressed their feelings as they were wrapping up the fan-con.

Kevin: “We hope that we can keep making music that makes you happy. Terima kasih (t/n: thank you), The B!”

Sangyeon: “I feel thankful because I can finally meet Indonesian fans. I hope we can visit Jakarta often in the future, aku cinta kamu (t/n: I love you)”

Hwall: “Thank you for making a special moment for me”

Hyunjae: “Even though this is our first time visiting Indonesia, you showed us a great energy. Please keep supporting us”

Juyeon: I will always be here, The B. Aku cinta kamu“

Jacob: “We have the best day ever. We hope we can also be the stars for you. Kami cinta kalian“

Q: “Thank you for gifting us with your presence today. Our cool performances are all thanks to you. I’ll work hard until we meet again”

Eric: “I never thought that I have a lot of tears until the fan-con (tour) started. We’ll be your shooting star too” 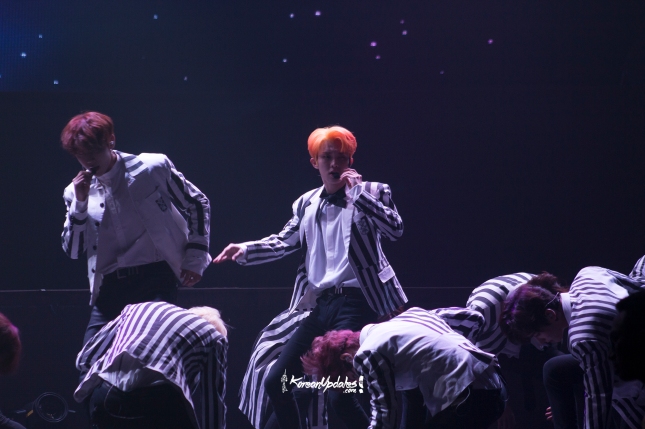 The fan-con ended with confetti and our favorite performance of “Clover”. Check out the full set-list of their fan-con in Jakarta yesterday below!

KoreanUpdates would like to thank Three Angles for giving us the chance to witness yet another fantastic show. Cheers for many more amazing events in the future!