Joyful, are you ready?

JBJ, a group that consists of former “Produce 101 Season 2” contestants, announced their 1st concert, JOYFUL DAYS . The concert tour kicked off last February 3-4, 2018 at Seoul Olympic Park. As reported, there was approximately 60,000 people tried to access Melon Ticket on December 28 to reserve their seat, and all were sold out in under a minute. The group has previously sold out 7.000 seats on their debut showcase, also in a minute.

JBJ is a group that was originally formed by Produce 101 fans with ideal members combination based on their performances and chemistry throughout the survival show. The group consists of six members: Roh Tae Hyun, Kenta, Kim Sang Gyun, Jin Longguo, Kwon Hyun Bin, and Kim Dong Han. After continuous support, JBJ eventually made its debut with “Fantasy” in October 2017. JBJ has been crowned crowned a Rising Star Award on Asia Artist Awards and K-pop Singer Awards on Korean Culture and Entertainment Awards just after their debut. The group has also successfully named as Global Rookie Top 5 on V Live Awards 2018. Their recent mini-album “True Colors”, which was released on January 17, was sold around 100,000 copies in its first week. Title track “My Flower” also topped some of Korea’s major real time charts.

JBJ will meet Indonesian Joyfuls in Jakarta through their Joyful Days concert tour next April 7 at The Kasablanka Hall, Kota Kasablanka Jakarta.

Early bird sale will be held on March 2nd (TODAY) at 7PM until March 3rd at 10PM, while public sale will officially be opened on March 4th at 7PM online via Kiostix’s website. 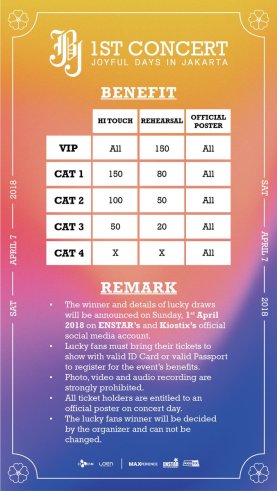